« Back to All Press

Window World Partnered with MerleFest 2015 for a Weekend of Music, Art & Community Support! 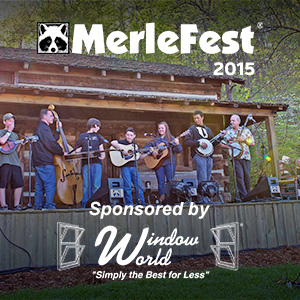 Wilkesboro, N.C., May 4th, 2015 – Window World was excited to revisit its roots as the presenting sponsor of MerleFest 2015, a music and arts festival held annually in Wilkesboro, NC, the location of Window World’s Headquarters. This year’s event ran from Thursday, April 23 through Sunday, April 26, and attracted more than 78,000 visitors from around the globe.

Over the course of four days, renowned artists from a wide variety of genres entertained excited festival-goers from all over the world. Just a few big names that rocked MerleFest this year included North Carolina natives The Avett Brothers, Robert Earl Keen, Trampled by Turtles and Steep Canyon Rangers, among many others.

But the festival wasn’t limited to just music. MerleFest celebrates Americana culture in many ways. Between daily jam sessions, a songwriting contest, instrument picking lessons, heritage craft demonstrations and many more activities, there was plenty to do for the whole family!

Born in 1988, MerleFest began as a celebration of the music of North Carolina native Doc Watson and his son Merle, who had been killed in an accident on the family farm in 1985. Until his death in 2012, Doc Watson remained the primary host for the festival. Though it continues to remain true to its roots, MerleFest has grown to include various genres of music, including Americana, Country and Rock.

For Window World, MerleFest was a perfect opportunity to not only show support for yet another great cause, but also to celebrate its North Carolina heritage. As the primary fundraiser for Wilkes Community College Endowment Corporation, MerleFest helps raise money to fund scholarships, capital projects and other educational needs — a mission that Window World is thrilled to support! Artists even performed for nearly 7,000 children from local schools on Thursday, in honor of the educational initiative.

As both organizations focus on giving back to the community, Window World’s partnership with MerleFest was the perfect marriage of values, celebration of American tradition and a fun opportunity to support a great cause!

“We at MerleFest were so proud to have our new presenting sponsor and local neighbor, Window World, at this year’s festival. The Window World team arrived with some pretty impressive products and displays,” said Ted Hagaman, MerleFest festival director. “It was great to see the employees of Window World dressed in bright blue shirts all across the festival grounds. Their enthusiasm and excitement to be here was contagious.”

Window World®, headquartered in North Wilkesboro, N.C., is America’s largest replacement window and exterior remodeling company, with more than 200 locally owned and operated offices nationwide. Founded in 1995, the company sells and installs windows, siding, doors and other exterior products, with a total of over 10 million windows sold to date. For the second consecutive year, Window World ranked “Highest in Customer Satisfaction with Windows and Doors” by J.D. Power. Window World is an ENERGY STAR® partner and its window products have earned the Good Housekeeping Seal for seven consecutive years. Additionally, through its charitable foundation Window World Cares®, the Window World family provides funding for St. Jude Children’s Research Hospital®, where it was named New Corporate Partner of the Year in 2010. Since its inception in 2008, the foundation has raised over $4.85 million for St. Jude. Window World, Inc. also supports the Veterans Airlift Command, a non-profit organization that facilitates free air transportation to wounded veterans and their families. For more information about Window World, visit www.WindowWorld.com or call 1-800 NEXT WINDOW.

Founded in 1988 by Musician Doc Watson and named for his son, Merle, MerleFest is one of the largest music festivals in the United States. The event is held annually on the campus of Wilkes Community College in Wilkesboro, NC and is known to draw more than 79,000 visitors each year. The festival has become the primary fundraiser for Wilkes Community Colleges’ endowment fund, which funds educational needs.

« Back to All Press